The aim of the trip is for you to ‘go bush’ with as little western cushioning as possible, to walk, track, trap and hunt every day – learning expedition skills, field-craft and gaining the knowledge to travel safely in the veldt. This expedition focuses on traveling light-weight and living simply in the desert; using a blend of primitive skills, modern know-how and traditional bushman skills. You will be spending everyday exploring, walking and living in the bush with the masters of this environment – the Bushmen.

Your adventure will take place in the rugged Erongo Mountains, a wild and rocky landscape of steep escarpments looking out over the vast wilderness of the Namib Desert. A true truly ancient wilderness, made up of volcanic granite and basalts and slowly eroded for 130 million years, the Erongo Mountains are truly stunning. Small kopjes rise from the sand floor, covered in cliffs, boulders and slab rocks.

Here you will learn the art of light-weight desert travel and how to move safely and easily through the African bush. Trekking with a few essentials, you will learn desert survival skills, like how to find water in this parched landscape, light fires by friction, learn to trap small mammals and birds, how to process large game, as well as the art of tracking and protocols for wildlife encounters, and we will trek to undiscovered ancient Bushman rock art sites, far from the tourist trail, that few people have ever seen.

The volcanic basin is packed with indigenous wildlife, from tiny dik-dik and klipspringer to hyena and leopard, to larger antelope like oryx and kudu, and the giants of the continent, the wild desert elephants. This is not a trip for the faint hearted! You will learn how deal with snake encounters, avoid scorpions, how to stay safe in big cat country and a myriad of other skills that enable life in the veldt.

This expedition is a hands-on, desert survival skills training course and you will be expected to hike, build, carry, gather, trap, dig and cook.

“Tracking is like dancing, because your body is happy. It is telling you the hunting will be good. You feel it in the dance. It tells you. When you are tracking, and dancing, you are talking with God.” – !Nqate Xqamxebe (a persistence hunter featured in the documentary film The Great Dance: A Hunter’s Story)

Very few people get to experience the veldt in this way, so don’t be surprised when you fall in love with the desert – bewitched by her brooding tawny landscapes, the gentle peoples and her incredible wildlife.

Note: please do not book your flight until you have confirmed your place on the course with us and made email contact first – this trip will need a minimum number to run.

Depart London (or other home country)

Travel from Windhoek to Erongo Mountains.
Lunch on the road.
Camp - San Camp

In the Bush
Camp - Leopard Rock

Hike out of the bush and minibus transfer back to Windhoek

Hike back to farm late morning.
Drive to Windhoek
Check in to Chameleon -
shower and beers at the bar.
Dinner at Joe's Beer House.

Explore Windhoek - buy curios.
Airport shuttle at 13.00
to arrive at airport for 14.00 and fly home.

Insurance: You must have robust medical travel insurance something like –http://www.voyagerinsurance.com/high-risk-voyager/

Please note: It is advisable to make copies of the relevant pages of your passport, your flight tickets, and your travel insurance policy in case the originals get lost.Keep one set of copies with you, one set in your luggage and leave one set with a friend or family member at home. If possible, scan these documents, and email them to yourself, using an email address with sufficient memory storage (visit www.gmail.com for a free, large storage email account).

San (Bushmen): Southern Africa’s earliest inhabitants were the San, a nomadic people organized in extended family groups who could adapt to even the severest terrain. San communities later came under pressure from Nama groups. The Nama were a tribal people who raised livestock rather than hunted, and who were among the first pottery makers in the archaeological record books. They came from the south, gradually displacing the San, and remained in control of Southern Namibia until around 1500 AD. Descendants of the Nama and San people still live in the country, but few have retained their original lifestyles. The Bushmen make up only 3% of Namibia’s population.

Geography: The volcanic Erongo mountain range rise to 2,320m above sea level. This roughly circular massif dominates the flat plains and is flanked by the Namib Desert to the west and a mixed, woodland savannah to the east.

The mountain is an eroded relic of a volcano that was active some 140-150 million years ago. It collapsed in on its magma chamber, allowing the basin to fill with slow-cooling igneous material. The resulting hard granite-like core, that withstood the erosion, washed away the surrounding rock.

Climate: Predominately a desert region, Namibia has clear and windy weather. The area we will be visiting has a rainy season from October to April. There is an average of 2mm of rain in October at our location and 10 hours of sunlight a day.

Flora: The Eastern area that we shall visit is predominately tree dotted bush- land, grassland and semi-arid scrub savannah.

We will not be visiting any game parks, and the whole course will be conducted in unprotected bush-land or unfenced farmland. These areas are home to numerous antelopes, carnivores and reptiles.

Accommodation: The first night of the expedition will be spent bush camping in lightweight netted tents at a rustic campsite, with shower and toilet facilities. Allowing time to recuperate from the flight, cover the initial safety briefs, have a beer, eat and relax. The next five nights will be spent under your nets, looking up at the stars, camping in the bush.

Base-camp latrines will be expedition-style, screened and seated long-drop toilets. There will be an ample supply of water available for personal washing, and a screened expedition shower will be provided. In the bush, you will be expected to use personal cat-holes.

The final night will be back in Windhoek to ensure everyone makes their flights home, staying at Chameleon, a relaxing guesthouse in Windhoek, with an evening meal at the famous Joe’s Beer-house.

Meals: All of the food on the expedition will be cooked outdoors over an open fire, as the favorite way of preparing meals in Namibia is on the braai (barbecue).

Food will be largely seasonal, local and where possible organic, with some of the food produced on the farm. The wild game / meat options are truly delicious, with barbecue and steak being an option most nights. Vegetarians / vegans are also well catered for.

It is best to withdraw your cash in small denominations for making purchases out of the city.

On the trek we will visit water caches on a daily basis. You are advised to filter and treat all surface water collected away from these areas with iodine or a good micro filter.

Alcoholic Drinks: You will be expected to pay for your own alcoholic beverages. You are asked not to drink alcohol whilst we are in the bush. 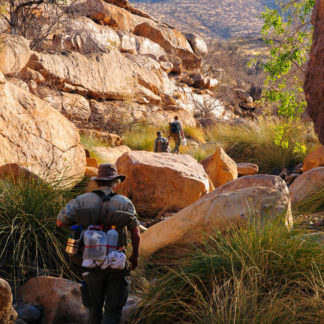