Bespoke Namibia – Hunting with the San

The aim of the course is for you to ‘go bush’ with as little western cushioning as possible, to walk, track, trap and hunt every day – learning expedition skills, field-craft and gaining the knowledge to travel safely in the veldt. You will be spending everyday exploring, walking and living in the bush with the masters of this environment – the Bushmen.

Bespoke Namibia – Hunting with the San

Climate: The Kalahari is hot and dry

Consistent with the ethos of Wild Human, this expedition aims to provide you with the knowledge and skills required to plan and undertake your own adventures in a Desert Savanna environment. This is a hands-on experience and you will be expected to participate in all practical activities relating to desert travel and living. This means collecting firewood, helping with cooking, looking after your own sleeping arrangements, using cutting tools etc. The Wild Human team will teach you the practical routines and desert bushcraft to feel comfortable and at ease in this ‘extreme’ environment and the Bushman trackers will impart a myriad of techniques used to sustain life, from tracking spoor to hunting with poison arrows. This expedition is not simply to sample the culture or environment as a passing tourist, but to become absorbed by the spirit of the place itself, as you follow some of the last hunter- gather peoples, in what remains of this vast ancient desert.

From the outset it’s important that you understand that the expedition is NOT a cultural tour –  This is a practical desert experience in a remote location where you will be required to help with the tasks required to live and travel in such a place.

Travel from Windhoek to 'Out of Africa' in Otjiwarongo.
Lunch on the road.
Lodge meal.

Hike out of the bush and travel to Roy’s Camp

Leave Roy's and return to Windhoek.
Check in to Chameleon - shower and beers at the bar.
Dinner at Joe's Beer House.

Insurance:
You must have robust medical travel insurance something like –http://www.voyagerinsurance.com/high-risk-voyager/

Please note:
It is advisable to make copies of the relevant pages of your passport, your flight tickets, and your travel insurance policy in case the originals get lost.Keep one set of copies with you, one set in your luggage and leave one set with a friend or family member at home. If possible, scan these documents, and email them to yourself, using an email address with sufficient memory storage (visit www.gmail.com for a free, large storage email account).

San (Bushmen) – Southern Africa’s earliest inhabitants were the San, a nomadic people organized in extended family groups who could adapt to even the severest terrain. San communities later came under pressure from Nama groups. The Nama were a tribal people who raised livestock rather than hunted, and who were among the first pottery makers in the archaeological record books. They came from the south, gradually displacing the San, and remained in control of Southern Namibia until around 1500 AD. Descendants of the Nama and San people still live in the country, but few have retained their original lifestyles. The Bushmen make up only 3% of Namibia’s population.

Location – The Nyae Nyae Conservancy, established officially in February 1998, was the first in Namibia. At 9,003 square kilometers; the Conservancy has 752 members and is overseen by a conservancy committee. The Conservancy’s founding has given the Ju|’hoansi greater control over what happens in their area. It has also served to instil in them new confidence and to encourage new investment and entrepreneurial activities.

Geography – The Namibian landscape consists primarily of central highlands, of which the highest point is the Brandberg Mountain at 2,606 meters. The central plateau runs from north to south, bordered by the Namib Desert and its coastal plains to the west, the Orange River to the south, and the Kalahari Desert to the east.The average altitude of the NW Kalahari desert is 1,000 meters above sea level.

Climate – Predominately a desert region, Namibia has clear and windy weather. The area we will be visiting has a dry season from April to late October.

Flora – The North Eastern area that we shall visit is predominately tree dotted bush- land, grassland and semi-arid scrub savannah.

Fauna – We will not be visiting any game parks, and the whole course will be conducted in unprotected bush-land or unfenced farmland. These areas are home to numerous antelopes, carnivores and reptiles.

The first night of the expedition will be spent at the Out of Africa guesthouse in Otjiwarongo . Allowing time to recuperate from the flight, cover the initial safety briefs, have a beer, eat and relax.

The next four nights will be spent under the stars in lightweight tents camping in the bush.

Night six will be in rooms at Roy’s Rest Camp.

The final night will be in Chameleon, a relaxing guesthouse in Windhoek, with an evening meal at the famous Joe’s Beer-house.

All of the food on the expedition will be cooked outdoors over an open fire, as the favorite way of preparing meals in Namibia is on the braai (barbecue).

It is best to withdraw your cash in small denominations, for making purchases in villages.

You are advised to filter and treat all surface water collected away from these areas with iodine or a good micro filter.

You will be expected to pay for your own alcoholic beverages. You are asked not to drink alcohol whilst we are in Bushmanland.

There are no reviews yet. 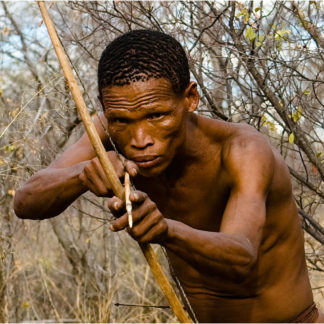